We have had two NASA grants with Washington University (St. Louis) for the development of detectors for NASA’s possible EXIST mission to survey the sky at ~10 – 500 keV and find about 10,000 sources. Our role was to use our finely collimated gamma-ray beams to measure the spatial and spectral resolution of new electrode techniques pioneered at WU. Our working relationship with WU goes back to the 90’s. 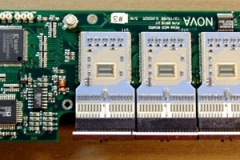 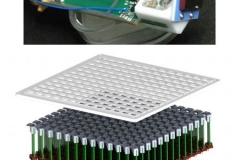 This SMEX mission is led by Caltech and is slated for launch in 2012. We tested many NuSTAR CZT detector elements in our lab with our collimated gamma-ray beams to help understand problems Caltech was having with “dead regions”. We mapped the detectors with sub-mm beams to isolate and characterize these regions.

We worked with Prof. Xuong (UCSD Physics and Chemistry) on high spatial resolution silicon detectors for electron microscopy, ~5 micron resolution. The initial work was with our 500 micron resolution CZT detector, which proved we could measure individual electrons in a noise-free, quantum counting mode. This was revolutionary because the existing technology has blurred images with low sensitivity and a poor signal-to-noise ratio, not what you want to study subtle features in the image. It uses phosphors to turn electrons into light and then CCD cameras to detect and image this light, both of which degrade performance. The new technique is essentially “perfect”. The advanced detector techniques we were developing was part of the “new technology” objectives of UCSD’s NIH Resource, NCMIR (National Center for Microscopy and Imaging in Research). Today a company is developing a commercialized version of the techniques. We worked closely with Dr. Xuong’s graduate students and trained them on radiation interactions and signal production in the detectors.

We participated on two projects: one was for the California Breast Cancer Research Program where we developed a proof-of-concept PET imaging system using our CZT detector technology. Key parameters were 1 mm position resolution, 3% energy resolution at 511 keV, and high efficiency. All of the technology was developed at CASS. These key performance improvements would enable greatly improved clinical diagnostic imaging to discover breast cancer if they were employed in a large device. Here the advantage would be the ability to reject image degradation due to gamma-ray scattering in the subject. With the good energy resolution, the energy shift of scattered gamma-rays could be measured and they would be rejected from image analysis. This would be a significant improvement is such a system came to fruition.

The second project was to use the same techniques in a PET imager for small animals, i.e., laboratory rats. in the system we worked toward. Our work led to a good system design and initial breadboard demonstration of functionality in many key areas. Stanford has taken over the development of a proof of concept imager.

We have had about five grants funded by the Domestic nuclear Detection Office (DNDO) of the Department of Homeland Security. All were joint projects with Aguila Technologies of San Marcos, CA, which became Creative Electron after the founder passed away. This work was based on the imaging detectors we are developing for X-ray astronomy. UCSD has licensed some of our relevant IP to the company, and they are pursuing commercial programs with it. Two notable events in these projects were (1) the demonstration of our hand-held gamma-ray imager in the lab to an agency technical officer and (2) the demonstration of the device at a scientific conference. Both were with live radioactive sources that simulated what a first-responder might have to search for.

Several years ago we worked closely with a group at Lawrence Livermore National Lab on a proposal for a vehicle-mounted gamma-ray imaging device to use to search for radiological threats at “stand-off distances”, ~100 meters. We were sought out as coded mask imaging experts, and we provided radiation detection information and simulations on coded mask instrument performance and optimization.

We began work with a company that provided scanners for large cargo containers. Their scientist had ideas for new techniques (basically using different physics than everyone else) for detectors which would greatly improve imaging capability. Our group was sought out to develop several important proof-of-concept detector demonstrations in our lab.