The Gamma Ray Spectrometers on the two Apollo missions — 15 and 16 — were developed at UCSD and flown in 1971 (apollo-15) and 1972 (Apollo-16). The spectrometers were large NaI(Tl) scintillation crystals located on a boom that extended from the Apollo capsules, and their goal was to map certain chemical elements over the surface of the Moon. natural radioactivity from uranium and thorium produced gamma rays, while cosmic ray bombardment of the lunar surface caused other elements to emit gamma rays. The spectrometer mapped about 20% of the lunar surface and provided the first chemical abundance maps of the Moon.

The detector system was composed of a large (7cm diameter by 7 cm long) NaI(Tl) scintillation crystal viewed by a photomultiplier tube, surrounded by a plastic anticoincidence shield. Pulse heights from the scintillator were digitized into 511 channels covering the range in flight of 160 keV to 27.5 MeV (Apollo-15) and 65 keV to 10.5 MeV (Apollo-16).

While in transit, the Apollo-15 spectrometer measured the cosmic gamma ray diffuse background in the 300 keV to 27.5 MeV band. While unknown systematic effects caused by cosmic ray bombardment of the detector and the surrounding environment (capsule and other structures) dominated the interpretation of the spectrum, it was clear that an extrapolation from lower energies was lower than the Apollo data would allow.

While in transit, Apollo-16 had the good fortune to detect and measure a gamma ray burst. This was the first example of a burst seen by two separate spacecraft. Vela 6A detected the burst at lower energies, while the Apollo-16 system detected it in the 67 keV to 5.1 MeV band. The spectral shape was, in hindsight, the first example of the Band function for describing gamma ray burst spectra. 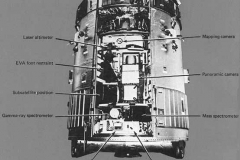 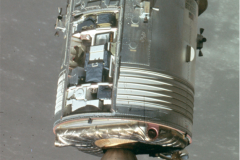