OSO-3 was designed to measure the ultraviolet through gamma ray radiation from the sun and the celestial sphere, and to characterize the spatial and energy distributions of the radiation. The initial approved mission lifetime was six months.

OSO-3 Launch SmOSO-3 was launched by a Thor-Delta rocket on March 8, 1967 into a nearly circular orbit at 550 km altitude and 33 degrees inclination. It therefore had a 95.6 minute orbital period. One of the two on-board tape recorders stored all telemetry for 90 minutes, and telemetered the data to ground stations in five minutes once per orbit. The tracking stations were at Ft. Meyers, Florida and on the west coast of South America. Data was collected in this way until the second tape recorder failed on June 28, 1968. 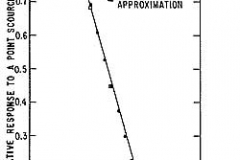 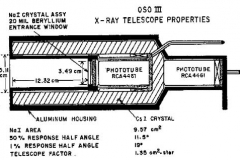 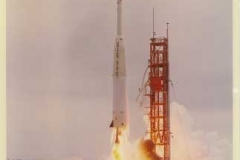 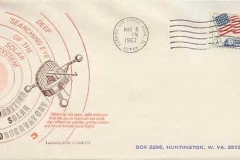 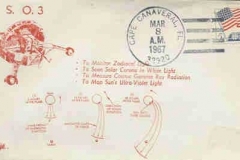 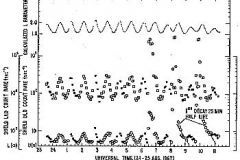 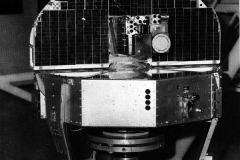 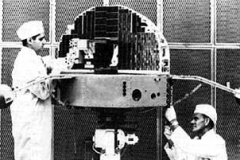 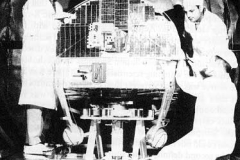 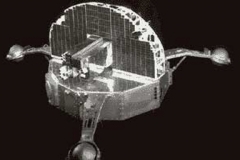 The major mission objectives of the third Orbiting Solar Observatory (NASA’s mission S-57) were to measure electromagnetic radiation from the sun and from the celestial sphere in the ultraviolet, x-ray, and gamma-ray regions of the spectrum. In addition, the energy and spatial distributions of these emissions were to be determined. This was accomplished, under NASA/GSFC project direction, by the prime contractor, Ball Brothers Research Corporation, and by the experiment builders at Goddard Space Flight Center, Air Force Cambridge Research Labs, Ames Research Center, Massachusetts Institute of Technology, and the Universities of Michigan, Rochester, and California, San Diego.

The MIT Gamma Ray Telescope (G. Garmire Principal Investigator) detectred, identified, and determined the celestial distribution of gamma rays at 100 MeV or greater. It utilized a combination of NaI and CsI scintillators to convert the gamma ray into an electron/positron pair which then passed through plastic scintillators and Cerenkov counters into a lead sandwich absorber.

The UCSD X-ray Telescope (L. Peterson, Principal Investigator) measured the intensity, energy, and directional properties of x-rays in the 7–190 keV energy range. A NaI scintillator with active collimation measured the energy of the incident x-rays.

The Michigan Solar X-ray Detector (R. Teske, Principal Investigator) measured the intensity of solar x-rays in the 8–14 Angstrom range. It used a nitrogen filled ion gauge that could discriminate between x-rays and high energy protons.

The AMES instruments (C. Neal, Principal Investigator) determined 1) the earth’s reflectance using the Earth Albedo Telescopes, 2) measured the long term effects of radiation on selected surfaces using the Emissivity Detectors, and 3) measured the infrared radiation from earth in the 1-30 micron range. The Earth Albedo Telescope used six photomultipliers with filters in the ranges centered at 3200, 3700, 4500, 5600, 6800, and 7800 Angstroms. The Radiometer Telescopes used a parabolic mirrors and filters to provide a focal point monitored by a thermistor.

The OSO-3 spacecraft consisted of a nine-compartment, 22 inch radius wheel from which three 24 inch arms extended, and a 22 inch radius sail structure. The UCSD X-ray Telescope occupied half of a wheel compartment. The wheel section spun at about 30 RPM to provide a stable platform for the sail. During the sunlit portion of the orbit, a motor drove the sail against the wheel so that the sail locked on the solar direction. Ground commanded firing of gas from the extended arms or energizing of a magnetic torque coil kept the wheel plane within 3 degrees of the sun. Thus, as the earth moved about the sun, the spin axis position changed an average of 1 degree per day, and in six months the great circle cut by the rotating wheel swept out almost the entire sky. The telescope missed about 10 degrees around the celestial poles, since the spin axis oscillated between -15 degrees and -35° declination, instead of precessing along a great circle.

The UCSD X-ray Telescope on-board OSO-3 consisted of a single thin NaI(Tl) scintillation crystal plus photomultiplier tube assembly enclosed in a howitzer-shaped CsI(Tl) anticoincidence shield. A drawing of the telescope is given below. The telescope was manufactured by Ball Brothers Research Corporation of Boulder, CO.

The central detector was 0.5 cm thick with 9.57 cm 2 area and an entrance window of 0.020 inch beryllium to minimize photoelectric absorption of low energy x-rays. The collimation by the CsI shield breaks down above about 170 keV, but still absorbs half of the normally incident photons at 620 keV and half of the 45 degree incident photons up to 1 MeV. Energy loss events in the central crystal greater than 7.7 keV and less than 210 keV, if unaccompanied by an anticoincidence event, were sorted into six logrithmically spaced differential energy channels and two integral energy channels. The six differential channels covered the energy ranges 7.7-12.5 keV, 12.5-22 keV, 22-38 keV, 38-65 keV, 65-113 keV, and 113-210 keV. The two integral channels were >7.7 keV and >210 keV. The energy resolution was approximately 45% FWHM at 30 keV, and increased as energy to the -0.33 power. A long term gain deterioration of the photomultiplier tube increased the effective energy thresholds by about a factor of 3 at the end of one year in orbit.

OSO-3 AngularResponse smThe angular response of the telescope is shown in the accompanying figure. This is a result of an analytic calculation taking into consideration the size of the collimator opening and the detector diameter, as well as the depth of the collimator section. This calculation was compared to measurements in the laboratory with a Co-57 radioactive source with emissionat 122 keV. This was them fitted by a trapazoidal function for analysis purposes. The opening angle is 23 degrees FWHM.

OSO-3 DetectorEfficiency smIn order to calculate the detector efficiency as a function of energy, one must take into account the various interactions and processes that occur between a photon incident on the telescope and the telemetered value of the energy for that event. This includes absorption by passive material in the beam (such as the beryllium window), probability of photoelectric, Compton scattering, and pair production interaction in the detector, light collection efficiencies, photomultiplier tube gain, and the characteristics of the data system. Also, included is the probability that an iodine K x-ray is emitted and escapes the detector, thereby lowering the measured energy by 29.4 keV. The energy resolution of the detector must also be included in the calculation (sigma(FWHM)=0.65 E 0.67 ). When all of this is calculated, generally by a Monte Carlo program, one has the probability of detection as a function of incident photon energy. This is shown to the right for the X-ray Telescope.

OSO-3 ShieldRates SmThe shield counting rates — counts/second above 7.7 keV and above 213 keV — as a function of time for 12 hours in August of 1967 are shown on the left. Also shown is the McIlwain L-parameter, which is a measure of distance from the magnetic equator, and thus of cosmic ray rate, since the instrument is better shielded from cosmic rays the closer it is to the magnetic equator. The earth’s magnetic field deflects lower and lower energy charged particles the closer one is to the equator. This is clearly seen in the Figure as a synchronous variation of the rates with the L-parameter. Also seen are large enhancements in the rates near 6:30, 8:00, and 10:00 which correspond to OSO-3 traversing the trapped radiation known as the South Atlantic Anomaly. This is an additional source of high energy charged particles, mostly protons, that increase the shield rates to saturation. These protons also cause a secondary effect — the radioactive activation of the telescope, especially the iodine in the scintillators. The rates decay away with the characteristic 25 minute half-life of iodine-128. Thus, even out of the Anomaly, the counting rates are enhanced. Other longer lived isotopes are formed which take longer to decay and build up to equilibrium over a month or more.

The diffuse x-ray component was measured in five energy channels between 10 and 100 keV, and accurate intensity measurements established the existence of a spectral break at about 40 keV as well as an overall normalization of 16.7 photons/cm2-s-keV-ster. Upper limits on any extended galactic plane emission were set at 2 x 10^44 photons/keV-s for 2-pi emission at 10 keV. A 2% upper limit was inferred for the fraction of the diffuse x-ray component arising from the galactic halo or the local supercluster. An upper limit of 800 km/s was set for any motion of the earth relative to the diffuse x-ray flux. At least 100,000 distant discrete sources are involved if the diffuse x-ray flux is the product of an integrated flux from these objects. Upper limits for the flux from M31, the LMC, and the SMC were found. (Ph.D. thesis of D. A. Schwarts, 1969)

Sco X-1 was studied with simultaneous optical coverage, and positive correlations between x-ray and optical flux were seen during flares, but not during lower level x-ray variations. The imprecise nature of the x-ray measurements, however, precluded detailed modeling of the emission region or regions. (Ph.D. thesis of R.M. Pelling, 1971)